Monthly Meetings held on 1st Fri of each Month at 9.00pm

Congratulations to Brendan Donnelly on not only securing the League title this year with a fantastic scoring season, but also being the 1st STAGS player to achieve the society's 1st hole in one in our 21 year history, a tremendous achievement, well done Brendan.

Congratulations to our new Captain for the 2022 season to

I hope all our members will give Martyn their support to make this year hopefully, a better one than the last 2 have been.

Fingers crossed we can have a successful 12 months and our Anniversary trip to Ireland (cancelled in 2020 & 2021) will go ahead in what will be our 22nd year as a society.

Below is a certificate we recently received from the QE Hospital in recognition of our fund raising for them over the last few years.

Well done to all involved. 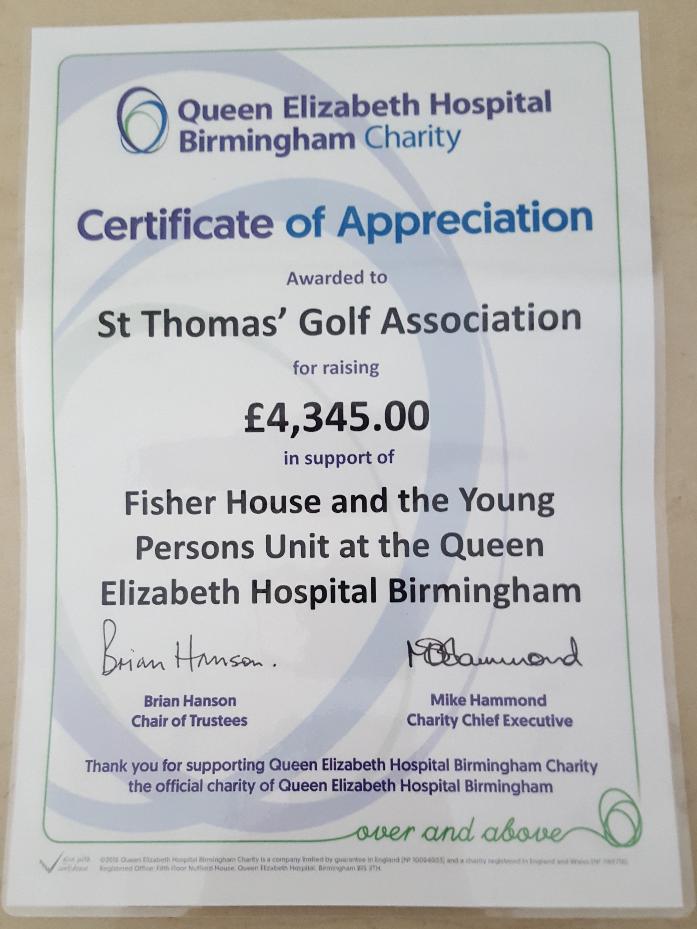 Our very own "Boom Boom" Tom Morahan popped in to see young Jimbo Daly on his visit to Oz !

STAGS making an Impact " Down Under "

Below is an extract from an Australian local daily paper which shows our very own "Jimbo " Daly is continuing his winning ways on the course Down Under. To see the article in its entirety please click on the link at the end.

RIVERSIDE Golf Club caused the second major upset in district pennant for the second consecutive week when they overcame the well-fancied Red Cliffs at Merbein Golf Club on Sunday.

Red Cliffs really looked the goods this year, but, like all other teams, they need their top players to stand up week in and week out.

Riverside are a good blue-collar, hard working team and they were able to grind out another solid win, with Englishman James Daly providing the highlight of the day defeating Justin McPhee.

Daly is a new name in district golf, having come from Birmingham, England and marrying a local girl. It was a close contest from the start with Daly recording only two bogies on the tough Merbein course to McPhee’s three bogies and a birdie.

Down the 19th they went, with Daly parring for a personal win and a win for the green and golds.

He is a name that will come to continued prominence the more events he competes in.

In other matches, Andrew Thomas had a great result against Brad Steer 4/3 and Ben Hogan was too consistent for Dom Vartulli, giving Riverside a 3/2 result. The Mildura Golf Resort/Broken Hill clash was an absolute rip-snorter, which took 92 holes to sort out a winner.

Andrew Stewart took first blood for Mildura at the 17th, then Mark Johns squared it up for the Hill in the second match.

The fun began when Tyson Steele and Matt Lynch took until the 20th to achieve a result, with Steele raising his putter to put Broken Hill in front.

District number two Cameron Stewart was finding it difficult to finish off Clint Jones, who had played a mighty game, until the 20th where Stewart prevailed to square the overall contest.

The last match between Ash Whitehouse and Nick Millstead was another high quality affair that saw Whitehouse’s great record at Merbein maintained, finishing 1-up at the 18th.

Two great exhibitions of pennant golf by all four teams on a golf course that was very well prepared for pennant golf.

This weekend, Division One pennant moves to Broken Hill for rounds three and four.

Broken Hill will start favourites against the giant killers Riverside on their home track, but on form it will be another nail-biter.

For more of this story, purchase your copy of Wednesday's Sunraysia Daily 19/06/2013.